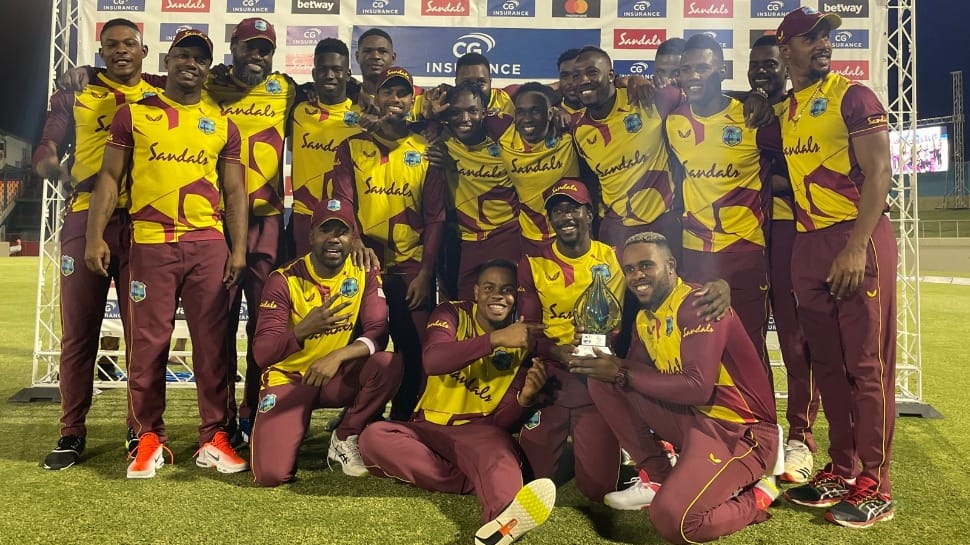 New Delhi: West Indies batsman Evin Lewis blasted 79 runs off 34 balls as the Twenty20 world champions defeated Australia by 16 runs in the fifth game in St Lucia on Saturday (July 17) to win the series 4-1 and send out a warning to rivals ahead of this year`s World Cup.

Chasing 200 to win, Australia made a solid start despite losing Josh Philippe in the first over as skipper Aaron Finch (34) and Mitchell Marsh (30) took charge, but the visitors lost their way after the duo departed to finish at 183-9 in 20 overs.

West Indies fast bowlers Sheldon Cottrell (3-28) and Andre Russell (3-43) ensured that Australia`s batsmen could not build on their starts as the hosts produced yet another dominating display at the Daren Sammy National Cricket Stadium.

Earlier, the West Indies chose to bat first after winning the toss and rode on opener Lewis` effort which included nine sixes and four boundaries to post a challenging total although the hosts were poised for an even bigger score at one point.

“It`s always good to contribute to a win. I`ve been working extremely hard from 2017 to now,” Lewis said, before looking ahead to the visit of Pakistan this month.

“This series means a lot to me, when you score runs against these teams you feel very good. It`s good for us, we have a lot of confidence going into Pakistan, but we want to keep playing smart cricket.”

Having reached 169-4 in 15 overs after handy contributions by Chris Gayle (21) and Lendl Simmons (21), the West Indies were restricted by some tight bowling by Australia`s Andrew Tye and Adam Zampa in the final five overs.

Andre Russell and Fabian Allen departed without troubling the scorers too much, before stand-in skipper Nicholas Pooran (31) was dismissed in the deep while trying to pull Tye and Darren Bravo became the pace bowler`s third victim.

The teams will now face each other in three one-day internationals starting July 20.