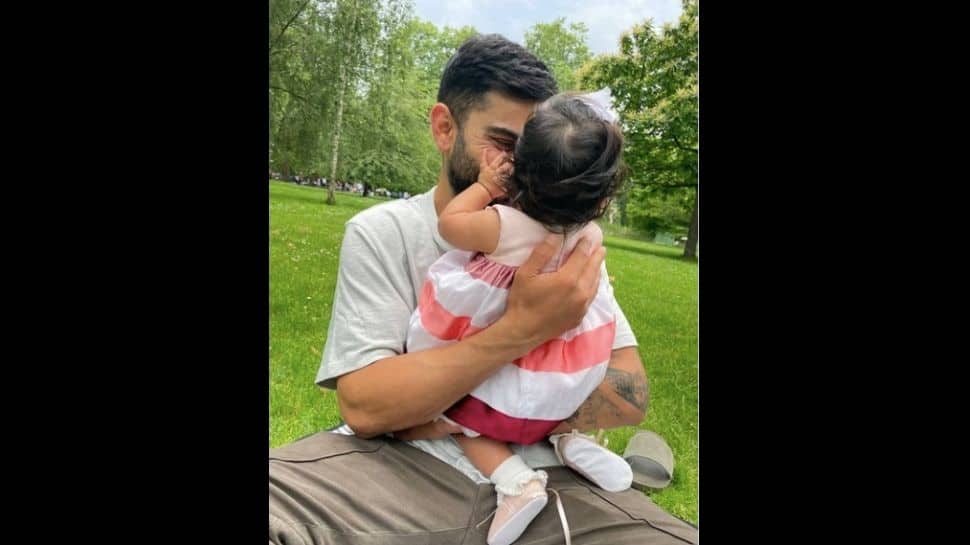 Team India cricketers are taking a long three-week break in the United Kingdom ahead of their five-Test series against England beginning on August 8. Skipper Virat Kohli is making the most of this break with wife Anushka Sharma and their daughter Vamika in London. Anushka, Kohli and Vamika enjoyed their Sunday (July 11) afternoon at a park in London and in the process the Bollywood star shared the first pics of baby Vamika with Team India captain.

Kohli and Anushka celebrated their daughter’s 6-month birthday on Sunday (July 11). The Bollywood actress took to Instagram to share a few pics from the celebrations. The star couple has mostly kept their daughter away from social media. Check out Kohli’s pics with Vamika…

“Her one smile can change our whole world around! I hope we can both live up to the love with which you look at us, little one. Happy 6 months to us three,” Anushka wrote in her Instagram post

Vamika was born in January 2021. Kohli had taken paternity leave during the Border-Gavaskar Trophy and he returned home from Australia after the opening Test for the birth of his first child. Anushka had not travelled to Australia.

He made his return to international cricket in the home series against England and was joined by his wife and daughter during the Test series. The Team India cricketers and their family members will have a long stay in the UK as the India-England five-match Test series will be played from August 4 to September 14. Following the Test series, the players head to UAE for the 2nd phase of IPL 2021. Most of the franchises allow the family members of the players to stay in the camp during the duration of the tournament.