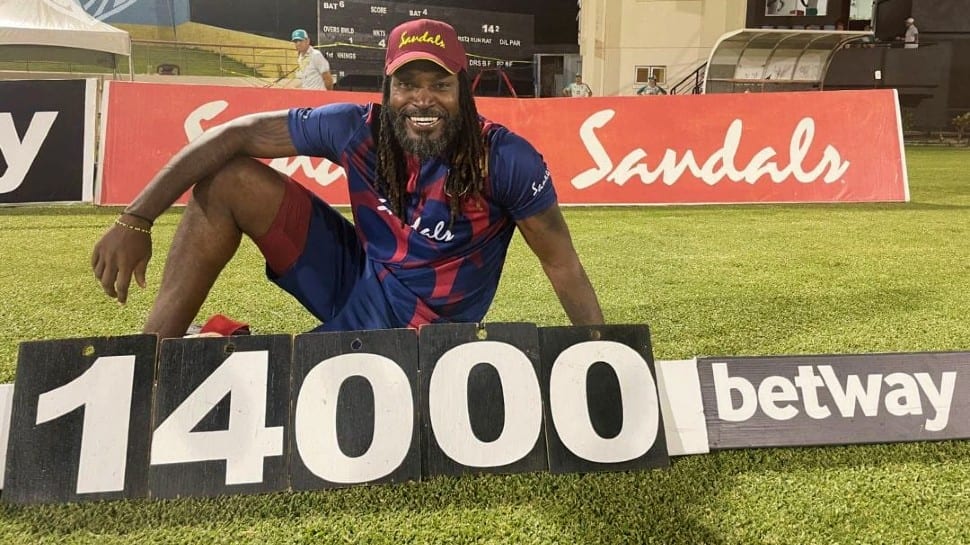 West Indies opener Chris Gayle had a modest first couple of T20 international against Australia but exploded back into form in the third T20. Gayle clobbered 67 off just 38 balls with seven sixes and four fours and in the process became the first batsman ever to complete 14,000 runs in T20 matches. Social media was in a frenzy with Gayle hitting form and completing a remarkable landmark.

The Universe Boss, who was part of KL Rahul-led Punjab Kings (PBKS) in the first leg of Indian Premier League (IPL) 2021, fell cheaply in the first two T20Is against Australia and questions were once again being raised about his future in international cricket. However, ‘Gaylestorm’ landed in the third T20I of the five-match series, as Kieron Pollard-less Windies stormed past Aaron Finch’s Australia by 6 wickets, and 31 balls to spare, in pursuit of a moderate 142 at Daren Sammy National Stadium, Gros Islet, St Lucia.

After restricting Aussies for 141/6, riding on Hayden Walsh’s 2/18, Gayle came out to bat at No. 3 for the Windies. The left-hander was on song from the word go, particularly hammering Josh Hazlewood and Adam Zampa to all parts of the ground. Gayle created history by becoming the first-ever cricketer to breach the 14,000-run mark in T20s. He achieved the feat with a huge six off Zampa in the 9th over of the run-chase.

Following his remarkable record, Twitterati bowed down to the ‘Universe Boss’, whose 3rd T20I knock was studded with as many as 4 fours and 7 sixes at a strike-rate of 176.32. Here are some of the reactions…

Who is the greatest T20 batsman of all time, and why is it Chris Gayle? #WIvAUS pic.twitter.com/pdZXwGr959

The Boss is back – 6,6,6 against Zampa and Chris Gayle complete fifty from just 33 balls including 4 fours and 5 sixes – 46 runs through boundaries. The greatest in T20 format. #WIvAUS #WIvsAUS #Gayle pic.twitter.com/NZSMwgr5fT

Speaking at the post-match presentation, Man-of-the-Match Gayle said, “It’s been a great journey. I’m so happy and pleased to get a series win. Congrats to the stand-in captain for achieving this against a great team. From a person point of view, we all know that I was struggling. So it was pleasing to get runs. I want to dedicate these runs to my teammates. Especially Kieron Pollard and Dwayne Bravo. Sometimes, no matter how great you are, you need to get some talking to.

“I don’t mind the numbers, soon to be 42 so you all should be glad that Chris Gayle is still playing. My real target is the World Cup and hope I’ll last till then,” he added.

As for Finch-led Australia, they now are on the brink of getting whitewashed by a resurgent Windies squad, who recently lost the five home T20Is to South Africa (3-2).